Nowadays Bladeless fans have become a trending device and are recently breaking all the records in the market. This air multiplier is a new innovation and is exceptionally unique in its own way so that people can easily love it. Because of its unique design, it has that flavor to give your home an aesthetic vibe. As these air multiplier does not have any blades it easily prevents the users from cutting themselves while turning the device on. In this article, we are going to list some of the best bladeless fans in India and their types (oval-shaped and tower-shaped bladeless fans).

Here you get the best products on Amazon.

What is an Air Multiplier and How does it Work?

An Air Multiplier which is also known as a bladeless fan is a kind of fan that blows air from a ring looking place with no external blades attached it to. These bladeless fans have their vanes hidden inside there base of the fan. A compressor is installed which allows us to draw the air towards it and then the air that is collected at the base is been directed through a hollow tube or toroid. Then that air reaches the ring-like surface which has no external blades. There is various slit in the ring that allows the air to blow out and thus helps in cooling the room.

The first bladeless fan that came to the market was in the year 2009 and after that, the popularity is growing massively. This air multiplier fan is safe to use and is powerful enough to make the entire room cool. This device has also got LED control which makes it easy and safe to use in low light.

Types of Bladeless Fan in India

There are basically two types of bladeless fans present in the market. The first one is those fans that shape like an oval or has a hollow circle in it, and the second one is the fans that is a tower-shaped bladeless fan and tall in size. Both of these bladeless fans are easy to use and are preventing us from getting hurt or cut. They can be easily cleaned due to few moving parts in them. 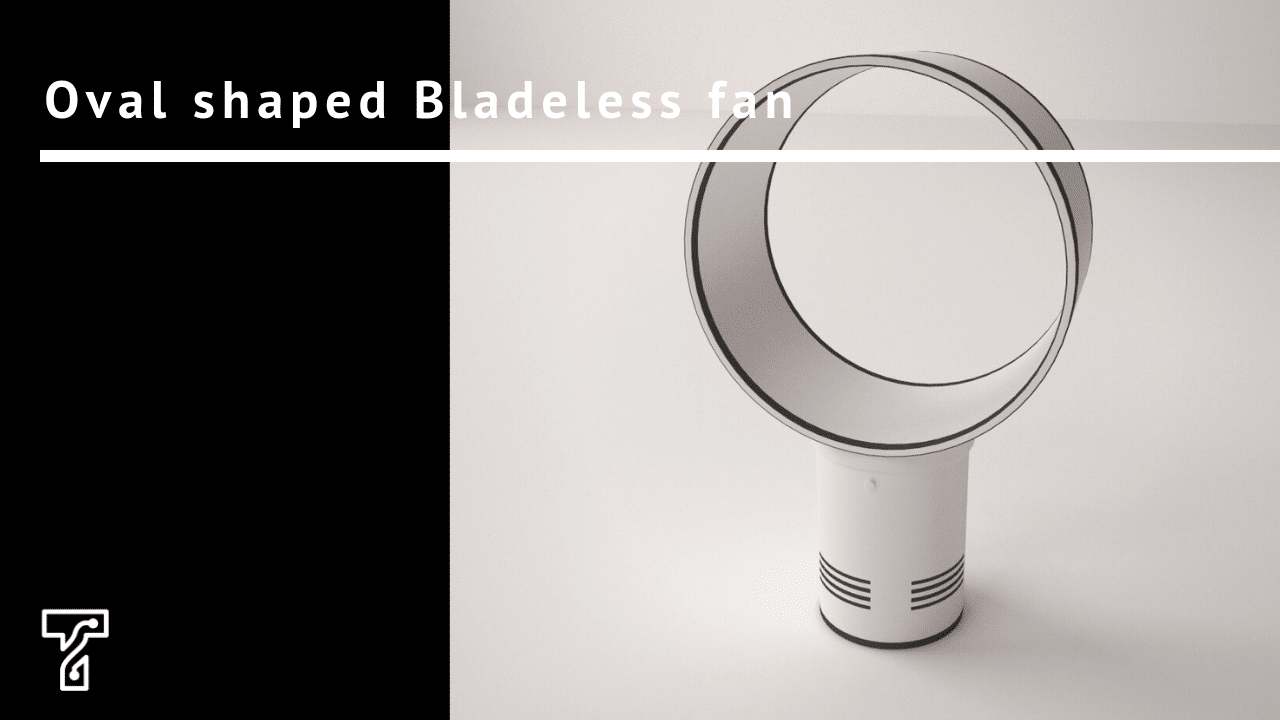 These Oval shaped bladeless fans are easy to use and can be cleaned quickly. These air multiplier contains remote control and has a 90-degree rotation system built within it. These bladeless fans in India ensure the utmost comfort as they are very powerful to make the entire room cold and fresh. There is a vane inside the base of this air multiplier which helps in absorbing the warm air and then pushes it upwards through the ring looking surface and thus makes the air cool. It is easy to clean and is easily portable because of its weight and hight. These oval-shaped fans are smaller in size compared to the tower-shaped bladeless fan. 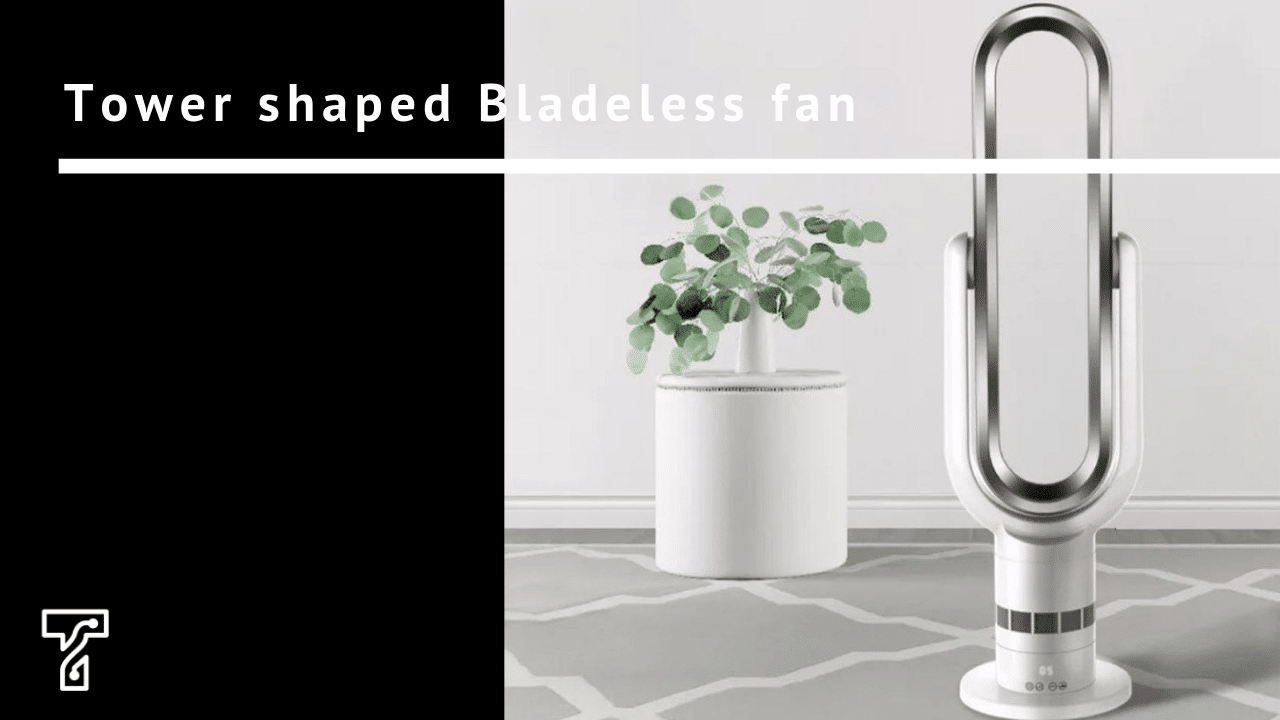 Buyer’s Guide before buying a Bladeless Fan in India

There are a few things that need to be seen before buying a bladeless fan in India. This technology has recently come into the market and has gain popularity and therefore there are many copy brands that have also come up with the same bladeless fan but with low quality. There this is the points that should be kept in mind before buying it.

When you choose to purchase a bladeless fan in India, you would have effectively expected where you would need it to be set. In light of the size of the room, it is significant that you check the intensity of the engine. Diverse bladeless fans in India have distinctive cooling advancements. The engine of your fan ought to have the option to disperse a consistent and disturbance-free wind stream to cool the region it would be put in. On the off chance that the room or region you would put the fan is extremely enormous, it would require an all the more large motor to cool the spot.

Before buying bladeless fans in India do check for the cleaning aspect. The first and foremost function of a bladeless fan in India or air multiplier is to make the room cool in this process it is natural for the device to pull in small particles. Some of the fans are difficult and complicated for a cleaning process which can result in damaging the device. So it is suggested to go for a device which has the function of auto cleaning or can be dislocated easily to clean the device from inside.

Having a fan that is lightweight and is compact and can be easily moved from one place to another or taking out on an outing is a must-have. Also, oscillation capacity is another element to pay special attention to. Oscillation is the thing that enables the fan to circulate cool air similarly in the territory it is set. The remote control controls the wind stream from separation while the rest clock accommodates programmed to turn off after a specific interim of time.

There is a huge differentiation in costs between brands that sell bladeless fans. The explanations behind brands selling devices at a hugely high cost are because of its strength and the popularity it has picked up. A bladeless fan that is successful with regards to its essential job of air cooling and goes with extra capacities is relied upon to be valued high. You may as of now have a financial limit at the top of the priority list when choosing to buy a bladeless fan, yet recall not to settle on quality when making a buy. It is additionally important to take note that a few fans may have a high cost because of the brand name and not on the grounds that they perform well. So check the gadget includes cautiously before making a buy. In view of the top bladeless fans in India referenced above and the guide that would enable you to comprehend subtleties to be checked when making a buy, we trust that you are in a superior position to make a choice of the best bladeless fan in India.

1. What is Bladeless Fan?

Ans: A bladeless fan is a kind of fan that blows air from a ring looking place with no external blades attached it to. These bladeless fans have their vanes hidden inside there base of the fan.

Ans: Yes These bladeless fans have their vanes hidden inside there base of the fan. A compressor is installed which allows us to draw the air towards it and then the air that is collected at the base is been directed through a hollow tube or toroid. Then that air reaches the ring-like surface which has no external blades. There is various slit in the ring that allows the air to blow out and thus helps in cooling the room

3. What is the best bladeless fan?

Ans: There is a huge variety of bladeless fans available in the market. At present Dyson is the company whose bladeless fans are in huge demand. But to know more about these fans follow the article above and it will help you to understand everything about it.

4. Is bladeless fan quite?

Ans: Yes, bladeless is quite comparatively the tradition one as this fan does not have any blades that cut through the air resulting in unpleasant sound.

5. Does Dyson make a ceiling fan?

Ans: Yes, bladeless roof fans by Dyson are progressively refined of making a smooth vortex wind stream which successfully homogenizes the room, while as yet keeping up an insignificant structure factor.

6. How many types of bladeless fans are there?

I hope the above article will help you in searching for the best Air choice bladeless fan in India. If you need any further help regarding your laptop, iPhone, MacBook and smartphones then you can contact us at +91 9088888835, live chat with us or request a call back. We provide in-home repair service for laptops, smartphones and more across India.

All the above products are tested and reviewed by Techyuga Experts.