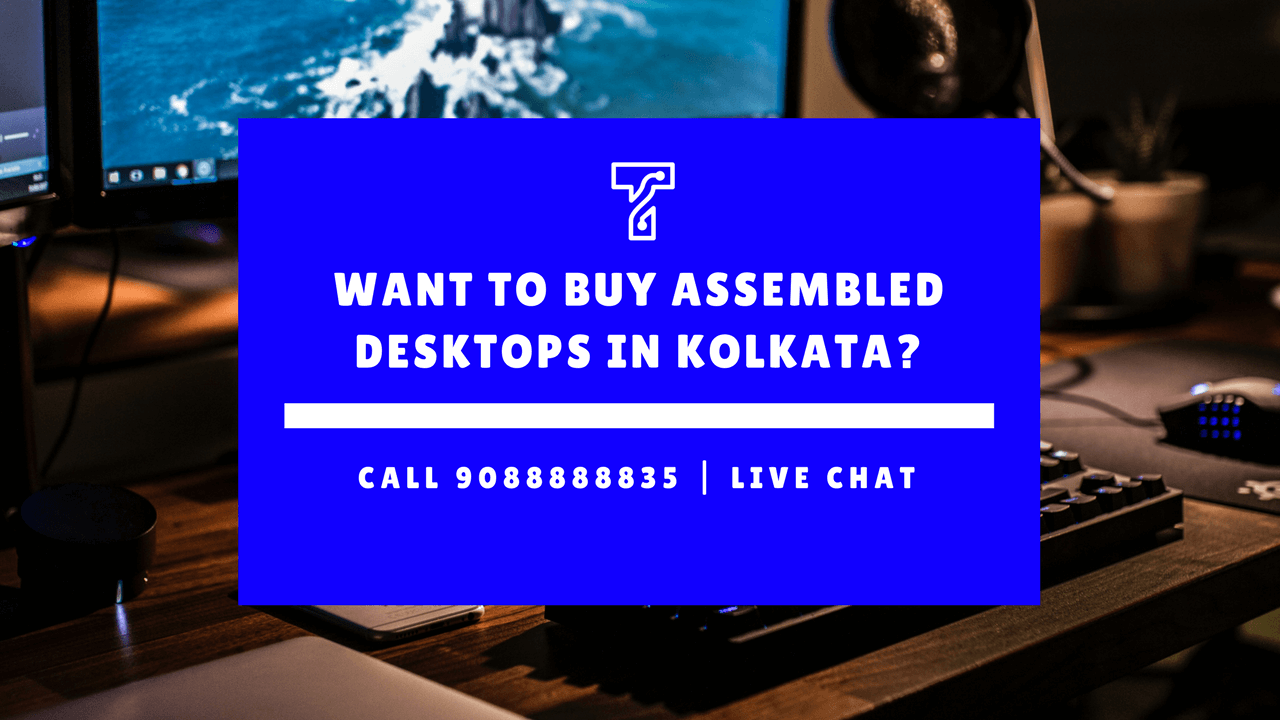 If you want to buy assembled desktop in kolkata then Techyuga is your best option. Techyuga gives you assembled computer in different range depending on the customer’s demand. Buying branded computer is quite costly for many people and they opt for assembled computer as it is price friendly. But some points everyone should consider before buying Computer.

Things to Remember Before Buying An Assembled Desktop In Kolkata

Before buying Desktop or Computer for your home or Office it is important to remember some important points. A desktop is not a use and throw product it is an investment for a long time so everyone needs to check these points before buying computer written bellow.

1. Desktop is a Long-term Investment – As I have said before Desktop is not a short term thing. A person who invested on a desktop, he does it for a long time utilization. So if you are buying desktop for home or office it is better to think long term and then invest your money as per your requirement. It is better to choose outfitted, dual core PC which have much long lasting life cycle with in a affordable cost.

2. Memory is important- In a PC RAM is very important thing as it makes your computer work much efficiently and fast. So if you want to buy a Computer in a low budget then choose minimum 4 GB RAM for it.

4. Graphics Card Slot for Further Up-gradation- There should be a scope of upgradation in your system though you buy a PC of low budget. If you choose PCI Express x16 slot in your PC then you can add graphics card later when you want.

5. Look For a Good Hard Drive Size- Before buying a Computer or PC we always look for a good size of Hard Drive because it matters. As much the size of your hard drive is, the memory capacity also increased. If you have many mp3 files and large video files then you need to go for minimum 500gb Hard disk.

6. Keep Extra Hard Disk For Backup- It is better to buy another Hard disk for Backup so that your data will be always safe and protected.

7. Machine Should Not Sound abruptly- No one will want that his/her machine takes bad sounds while you are doing important work. So if you are buying a low budget PC then always check the number & the quality of cooling fans.

8. Good Graphics For Gaming- If you are a gaming freak and also don’t have a capacity to invest a hell lot of money in buying a multi-GPU SLI or CrossFire setup on your gaming PC then you just need to buy a single, high-powered graphics card and that will be sufficient for most your gaming experience.

9. All in One Computer – All in one computer is a very space saving thing if you are running out of space but in that case the longevity of the computer gets lower and you need to run to the service center. So It is better to choose assembled computer from every aspect.

Know More About Each Assembled Part of Your Desktop

To buy assembled Desktop one need to buy monitor first as computer Monitor is the main Output Device which gives output in a display manner. It is usually combines the display device, circuitry, casing, and power supply. If you have an Office and need multiple number of computers then it is better to choose a desktop as you don’t need to roam around with your system. Desktop is cheaper than laptop and also it has much long life cycle which makes the investment value worthy. For office or school or any organisation one need multiple monitors and it is easy to get monitors from different brands like HP, Acer, Asus etc in a very low amount of money starts from 4-5 thousand rupees.

CPU is the Brain of a Computer so it is important to choose a good CPU.  It is the main processing unit of the Computer. Lets discuss about processor in a deeper way-

The least complex approach to clarify the processor is that it’s the brain of the machine. On the off chance that you need a quick PC that boots up programs in a glimmer, finishes assignments when you begin them, and doesn’t keep you pausing, at that point you need the most grounded processor accessible — and who doesn’t? You simply need to recognize what you’re taking a gander at when you see a processor’s points of interest.

Fundamental: the short and basic of processors is in the quantity of centers and the speed (marked in GHz or Gigahertz) of the processor. The speed of the chip will reveal to you how much information it can process in how much time, so the greater the number, the better. The quantity of centers works as a multiplier, as the processor is really a heap of centers that each keep running at the recorded speed (e.g. a solitary center 2GHz processor is a great deal slower than a four-center 2GHz processor).

Progressed: If you need to get into truly low down bits of the processor, look at the benchmark tests at CPUBenchmark. You can contrast various distinctive CPUs with check whether you’re getting the best one, and even check whether you’re getting the best for your cash. Additionally, look at the L1, L2, and L3 reserve sizes — these are the nearest and speediest memory spaces to the CPU and the greater they are, the better.

Just like CPU, RAM also effects the efficiency of the Computer. RAM or Random Access Memory helps to multitasking in a faster way.

Essential: Nowadays most RAM is estimated in gigabytes, and as is frequently the case, the more, the merrier. By having more RAM, your PC can keep more information close nearby, as opposed to going burrowing around through the slower hard drive for the data it needs. Obviously, on the grounds that RAM is littler, there is just such a great amount of space for information. That is the reason it’s valuable to have more RAM on the off chance that you need to keep various assignments going in the meantime, and to have the capacity to hop between them generally rapidly. In case you’re additionally blameworthy of having an excessive number of web program windows open in the meantime, more RAM will make that a great deal simpler.

Progressed: There is, obviously, more to RAM than simply its extent. On the off chance that you look at the specifics of the RAM in a PC and see that it’s DDR2-800, you can get a snappy sense this is a quicker memory than one named DDR2-400, as that last number implies what number of a huge number of information exchanges the RAM can make each second. Smash additionally has clock speeds, like processors, and the quicker, the better. Notwithstanding, that speed is restricted to the speed of your PC’s motherboard, so in case you’re purchasing RAM independently from your PC, make sense of the speed of your motherboard and don’t purchase RAM that is any speedier — as it will most likely cost you more for reasons unknown — and don’t purchase RAM any slower — as it will drive your motherboard to keep running at the slower speed. One last number you can note is in the module name, where you may see something like PC3-8500, which shows that the memory can exchange around 8,500MB every second — by and by, the greater, the better.

Each PC needs information stockpiling, and however that is something RAM does, its dominant part will go onto your hard drive. There are ordinarily a couple of various choices you’ll have to consider in the look for a hard disk, yet what it truly comes down to is the manner by which you intend to utilize your PC.

Essential: If you want to simply have your PC and no peripherals, you might need to decide on the greatest hard drive you can (estimated in gigabytes, or terabytes for additional vast drives), since the greater part of your documents and projects will be put away on the PC. On the off chance that you don’t plan to have numerous applications on your PC, and won’t store media on it, at that point you can settle on a littler hard drive and spare yourself some cash. In the event that you can deal with a little hard drive yet need to it be additional quick and you have the money, consider going for a strong state drive, or blaze hard drive.

Propelled: The measure of your drive is a certain something. On the off chance that it’s a circle drive, the turn speed is another. Normally, the speedier your hard drive plate is turning, the snappier data can be accumulated from it. Along these lines, between a 5400rpm drive and a 7200rpm drive, the second would be speedier. In the event that you can deal with having just a couple of bigger projects introduced on your PC at once, and plan to continue everything else put away on an outer gadget, you can most likely get a speedy gadget with a strong state drive to keep the PC zippy consistently, and still figure out how to stream astounding media through a USB association — a few applications may even have the capacity to keep running from an outside hard drive. You’ll additionally need to focus on information exchange transmission capacity. The higher, the better.

A motherboard (now and again on the other hand known as the mainboard, framework board, baseboard, planar board or rationale board,[1] or informally, a mobo) is the principle printed circuit board (PCB) found when all is said in done reason microcomputers and other expandable frameworks. It holds and permits correspondence between a considerable lot of the pivotal electronic parts of a framework, for example, the focal handling unit (CPU) and memory, and gives connectors to different peripherals. Not at all like a backplane, a motherboard more often than not contains critical sub-frameworks, for example, the focal processor, the chipset’s info/yield and memory controllers, interface connectors, and different segments coordinated for broadly useful utilize.

Users with minimum requirements may be better off buying a Windows Starter or Home Premium version e.g. of Windows 7. For users who wish to take advantage of more enhanced features and require more effective tools such as connecting their PC to a domain are naturally better off buying a Professional or Ultimate Edition. For office and organisational work one can opt for Linux operating system also.

Mouse and Keyboard  are the last thing but not the least.They are the main input device and without them the setup of desktop is incomplete. They are very cheap as per the value and easy replaceable whenever needed. Logitech, front-tech etc are some good Keyboard and mouse brand available in market.