iPhone 6S Battery Replacement In India. A Guide By Techyuga

Battery drainage issues of the iPhone are one of the most discussed problems for iPhone users that we are going to discuss here like we have previously discussed about the iPhone 6S screen replacement . So, if your iPhone’s battery is draining faster than normal battery life then you should think about replacing it. However, looking for iPhone battery replacement services online can be tricky and confusing since you will have to look for the best service centers online for your cell phone who can carry out this delicate process of battery replacement without causing further damage to the motherboard of the mobile phone. In this guide, we would like to educate the users as to how to replace an iPhone 6s battery so that you can choose the repair centers wisely. Moreover, this guide would be helpful for people who are looking for a DIY iPhone 6s battery replacement tutorial to save a few bucks from being spent behind expensive Apple Service Centers. For the technical people who are looking to do the battery replacement on their own, we are one of the greatest supplier of iPhone OEM spare parts in India shipping to all major cities of the country so that you can purchase the battery yourself and have it replaced. Having said this, it is nonetheless always recommended that you get a professional technician who can repair your device with utmost precision. So here is our take on how to replace the damaged battery of your iPhone 6s so that you can yourself get your phone up and running in no time.

Power off your iPhone before beginning disassembly.
Remove the two 3.4 mm P2 Pentalobe screws on the bottom edge of the iPhone, next to the Lightning connector. 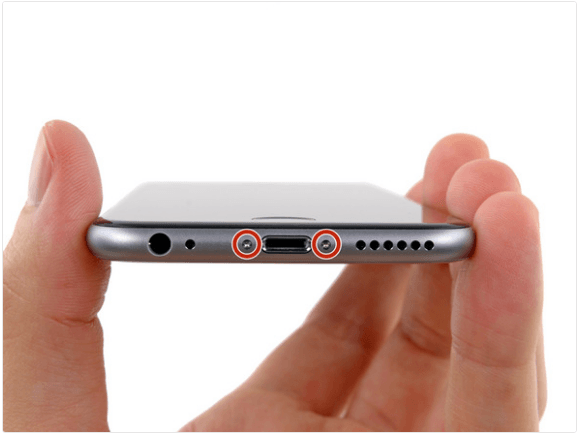 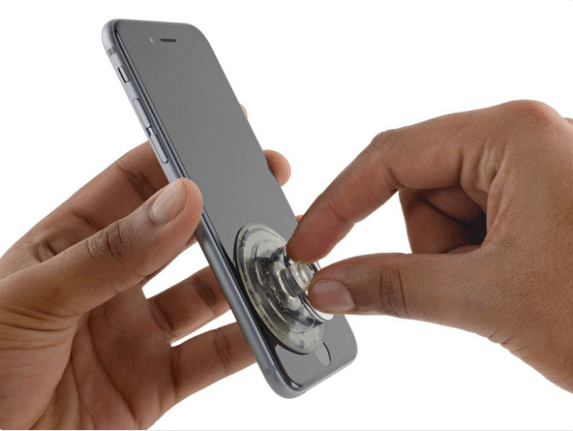 Opening the display on the 6s separates a thin strip of adhesive around the perimeter of the display. If you prefer to replace the adhesive, have a set of new adhesive strips ready before you continue. It’s possible to complete the repair without replacing the adhesive, and you probably won’t notice any difference in functionality.
Apply a suction cup to the lower left corner of the display assembly.
Take care not to place the suction cup over the home button. 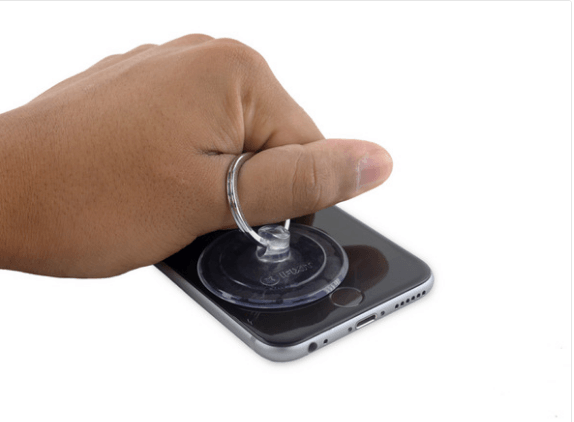 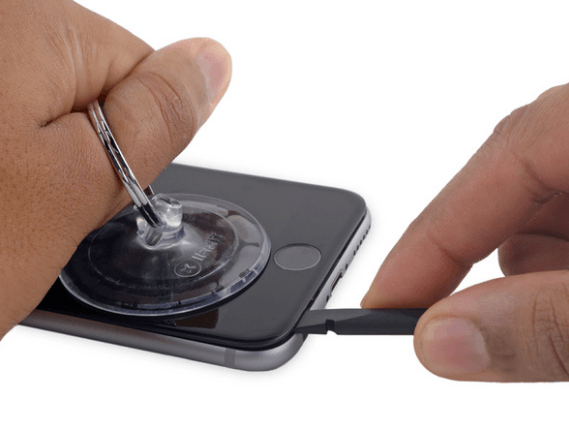 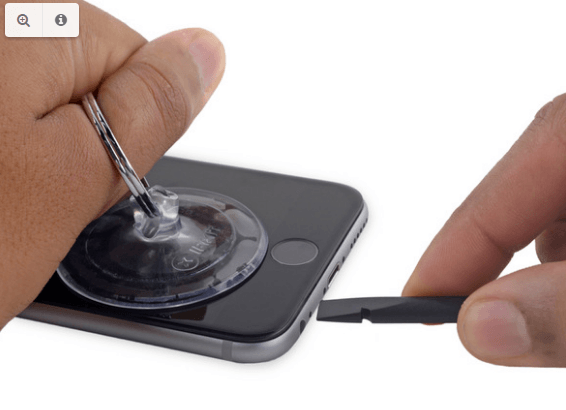 Twist the spudger to widen the gap between the front panel assembly and the rest of the phone. 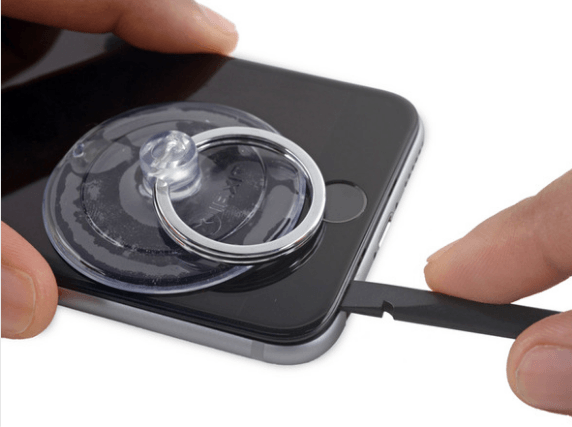 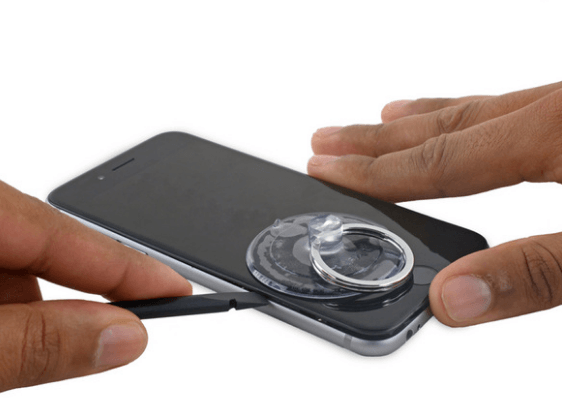 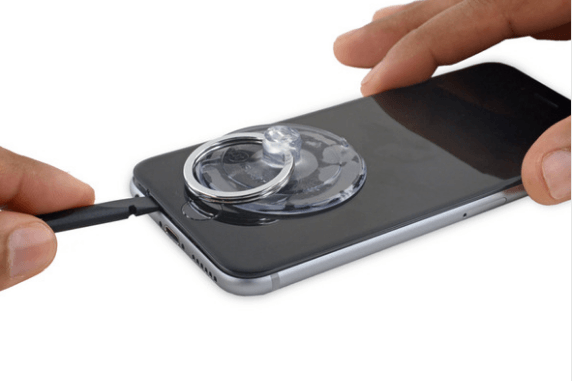 Slide the spudger up the right side to continue separating the adhesive and popping the display clips free from the iPhone. 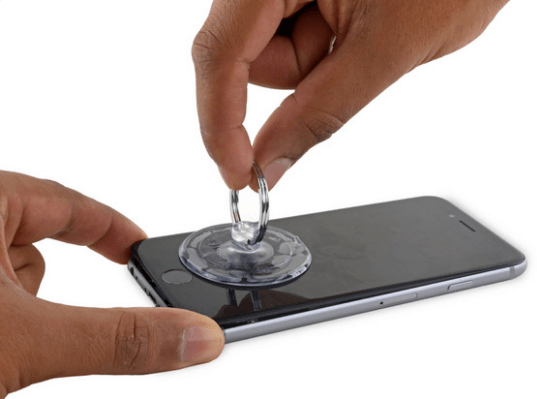 Use the suction cup to open the display, breaking the last of the adhesive.
Don’t open the display more than 90º, as it is still connected at the top by three cables that may break if stretched. 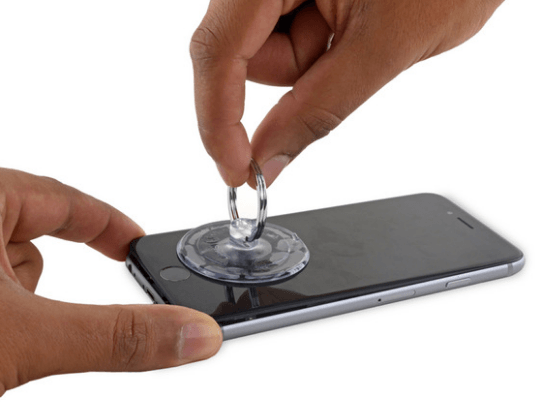 Pull up on the nub on the top side of the suction cup to remove it from the front panel.

Gently grasp the display assembly and lift it up to open the phone, using the clips at the top of the front panel as a hinge. 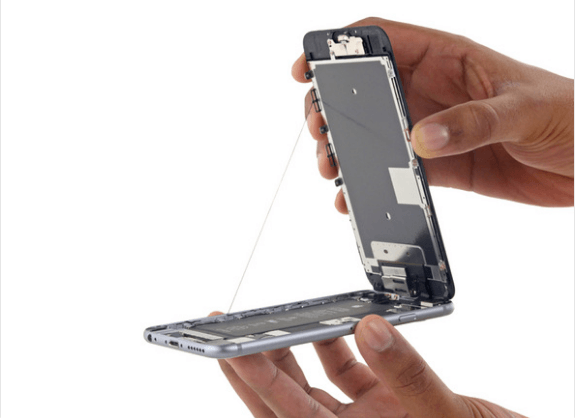 Open the display to about a 90º angle, and lean it against something to keep it propped up while you’re working on the phone.
Add a rubber band to keep the display securely in place while you work. This prevents undue strain on the display cables.
In a pinch, you can use an unopened canned beverage to hold the display. 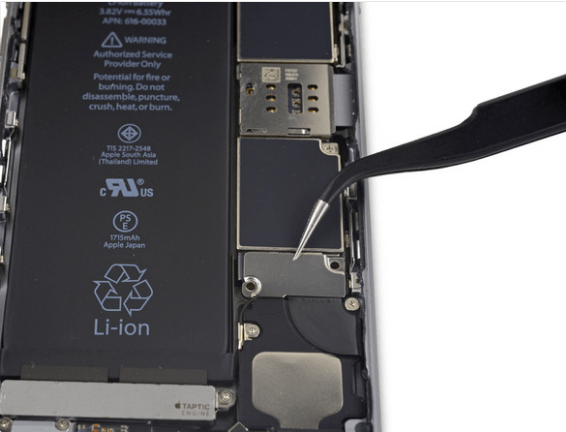 Remove the battery connector bracket from the iPhone. 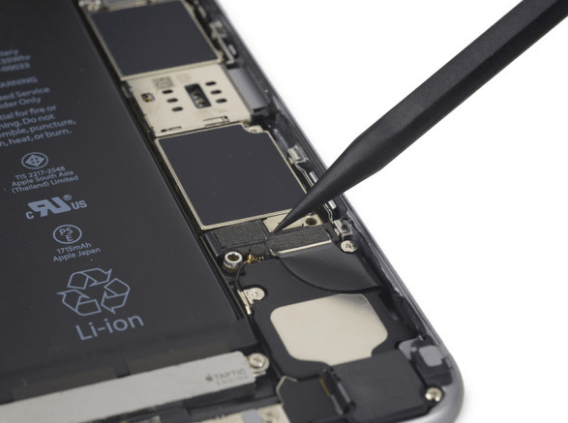 Use the point of a spudger to disconnect the battery connector by prying it straight up from the logic board. 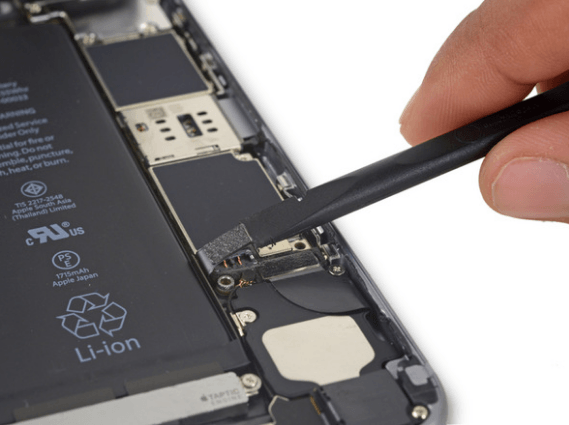 Push the battery connector away from the logic board until it stays separated from its socket, so as to avoid any accidental connection to the battery while you work. 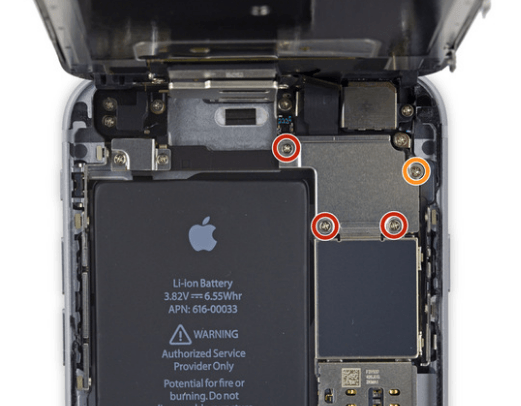 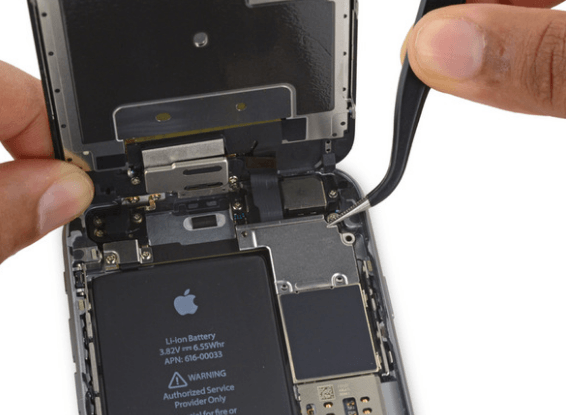 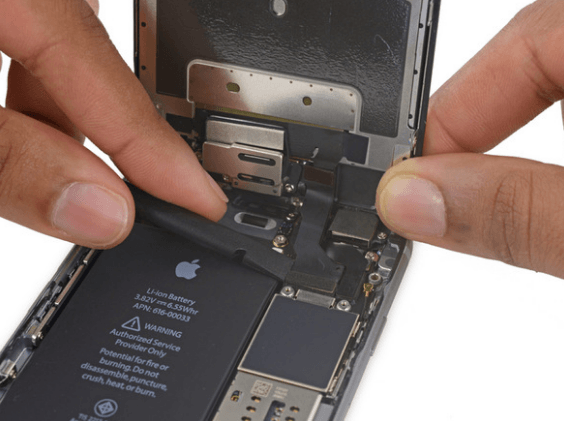 Use the flat end of a spudger, or a fingernail, to disconnect the front camera flex cable by prying it straight up from its socket on the logic board. 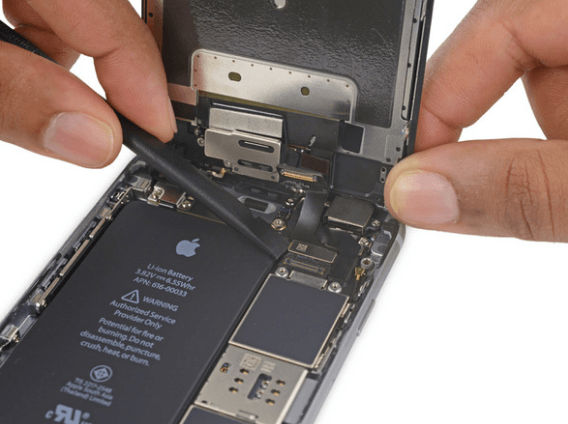 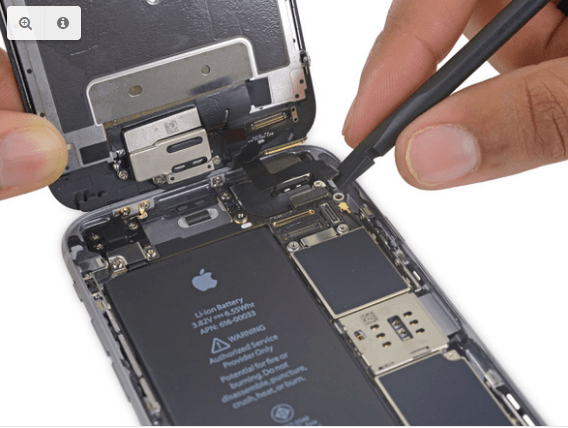 Use the flat end of a spudger, or a fingernail, to disconnect the display data cable by prying it straight up from its socket on the logic board. 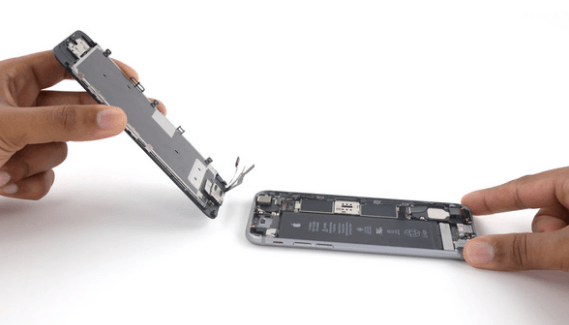 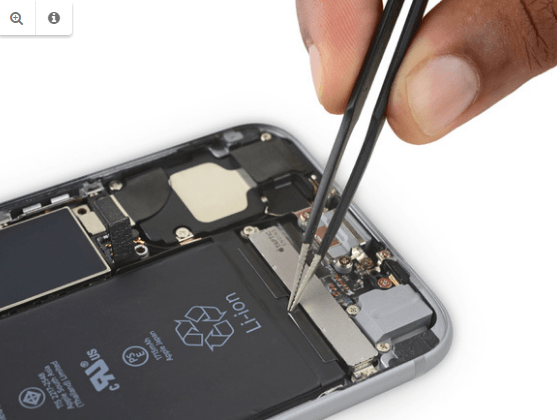 Use tweezers to peel back the tips of the two adhesive strips along the bottom edge of the battery.
Use your fingers or blunt tweezers. Be careful when working near the battery; puncturing a lithium-ion battery can release dangerous chemicals and/or cause a fire. 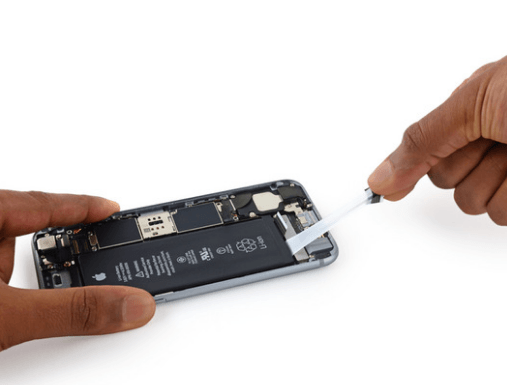 Try to keep the strips flat and unwrinkled during this procedure; wrinkled strips will stick together and break instead of pulling out cleanly.
Slowly pull one battery adhesive tab away from the battery, toward the bottom of the iPhone.
To avoid tearing the adhesive strip, be careful not to snag it against the battery or lower components.
Pull steadily, maintaining constant tension on the strip until it slips out from between the battery and the rear case. For best results, pull the strip at a 60º angle or less.
The strip will stretch to many times its original length. Continue pulling and re-grab the strip near the battery if necessary. 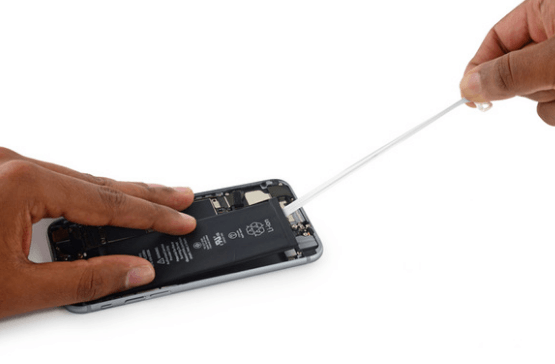 If you successfully removed all three adhesive strips, move on to the next step. Otherwise, you will need to pry the battery from the rear case.
Prepare an iOpener and apply it to the back of the rear case, directly over the battery. Alternatively, you can apply heat using a heat gun or hair dryer.
After about a minute, flip the phone over and use a plastic card to break up any remaining adhesive behind the battery.
Do not insert the card from the right, as prying against the logic board can damage it. Also, be sure to not bend the battery, as doing so can puncture the cell and release dangerous chemicals. 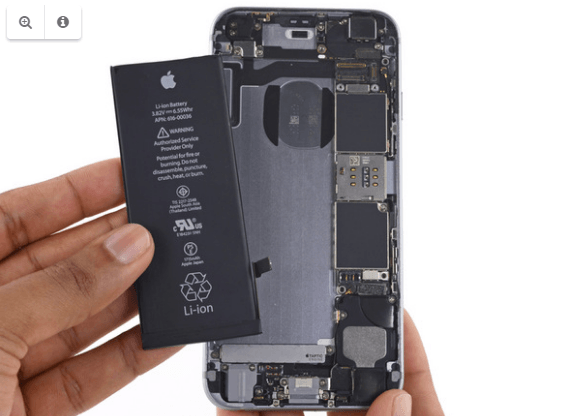 Remove the battery.
When installing the battery, refer to this guide to replace your battery’s adhesive strips.
Perform a hard reset after reassembly. This can prevent several issues and simplify troubleshooting.

To conclude this Battery replacement guide I must mention that iPhone 6s is indeed a delicate device so please whatever you do if you try this by yourself always remember to do it in front of professional supervision or rather it is recommended to get the help from the best and trusted iPhone repair centers. At Techyuga we provide the best in class mobile phone repairing services at an affordable for all brands including the iPhone. Having served more than 30,000 customers all over India and operating currently on 26,000+ postal codes we are proudly the best repair service center in the country. Call us on 9088888835 OR Live chat with our engineers here, you can also book a repair here  to avail our expert repair service within your budget.

iPhone 6S Screen Replacement In India| A Guide By Techyuga

What Is the Apple iPhone 6s Charging Port Repair Cost In India? Let’s Find Out