Founded by Zoog Services Ltd. four years ago on the Isle Of Man in the UK, ZOOG VPN has already been quite a name in the VPN World. They claim to be lightning fast, secure, and private. They also claim to work on Netflix.

But is that enough to suffice the thirst of the customer? No, certainly not. Far from doing mere lip service, we will be going in greater details and expose the entire thing in ins and outs. Then only you can gauge and judge its worth, and decide whether it is reliable enough or not.

I’m also going to lay out the pros and cons of the service to tell you if it’s easy to use, if ZoogVPN’s customer service is any good, and much more.Let’s begin Zoog VPN Review.

But first, let’s provide a little background information in our Zoog VPN Review.

The ZoogVPN website has a simple, modern design. It immediately inspired confidence.

The site features some high-quality graphics and is very easy to navigate. Here’s what ZoogVPN has to say about themselves:“The complete fast VPN service comes with easy to use apps, access to US Netflix & BBC iPlayer, no logs, own DNS servers, safe torrent downloads and up to 5 simultaneously connected devices.”

We did a quick search and saw pretty positive Reviews across the board. Most were pleased about the strong speeds.

But how accurate is this information? Are the speeds really that great? And how do they compare to other VPNs on the market? Customer Reviews are great. But the only way you can trust service is by actually using it yourself.

That’s why we signed up for a paid account, set up the VPN client, and tested the speeds of three different servers for ourselves. Right off the bat, ZoogVPN provides unlimited bandwidth and server switches.Other notable features include no logging and public wifi security

The VPN service also supports these devices and operating services:

ZoogVPN works on up to five devices simultaneously.

ZoogVPN has 25 servers in 17 countries. That’s pretty low in our experience, to be honest. For example, Trust.Zone has been around for roughly the same time but has over 130 servers across twice as many countries.

Thankfully, ZoogVPN does include many of the major cities in North America, Europe, and Asia.

ZoogVPN doesn’t appear to offer a kill switch. This kind of puts this service at a disadvantage.

Think of a kill switch like your ultimate failsafe. If something happens to your internet connection, your VPN connection usually drops out, too. That could leave everything you were just doing out in the open for prying eyes to see.

No wonder it’s one of the biggest complaints we’ve seen from other people, too.

Security and privacy are probably the most important factors to look at when selecting a private network. Privacy is the reason you’re using a VPN in the first place.

Well, that depends on the plan you’re using.

ZoogVPN has some industry-standard encryption AES-256 for the paid plans. This is the best of the best.

However, when using the free plan, you only get 128-bit encryption. Technically, it’s still pretty strong. It will cover you in most cases. But it’s not top-of-the-line, either.

If your main reason for choosing a VPN is privacy, be sure not to use the free plan. You get the security you pay for.

Torrenting is Allowed in ZOOG VPN:

It appears that torrenting is allowed with ZoogVPN. But that may depend on the server you are using.

For example, servers that allow P2P traffic will have a small “P2P” icon next to their server name.

Be sure to select one with this icon if you’re looking to use torrenting.

ZoogVPN states that they keep no logs.

However, like a ton of other VPN services, that’s not entirely true.

When you check out their privacy policy, you’ll find that they actually collect a ton of user data, such as session records, personal information, and cookies.

However, they claim not to share this information with third parties.

It’s still a bit of a turn off that they claim not to collect data, even though they doing.

Nearly every VPN service claims to have incredibly fast speeds.

ZoogVPN is no different. So I put them to the test, analyzing download speeds on EU and US servers.

ZoogVPN is cheap (and they have a free plan)

First, the good news. ZoogVPN offers a free plan. So you can sign up and try out the service without ever seeing a bill.

The bad news is that there are several restrictions.we found this in our Zoog VPN Review.

For example, you’re only able to access three free servers in New York, London, and Amsterdam. You are also only allowed a little over 2 GB of data transfer for free under this plan.

You might hit that threshold pretty quickly if you’re watching movies, downloading media files, and more.

There’s also no guarantee that the speeds will be fast on the free plan. They offer their “Best effort Bandwidth” with a free account.

If you’re ready to take the next step, the company offers a one, six, and twelve-month plans.

All of these packages give you the same exact features. So you get access to every server, unlimited data transfer and bandwidth, five simultaneous connections, and full content access.

The only difference is the term you’d like to prepay and the discount for each.

Here’s a breakdown of the current pricing. 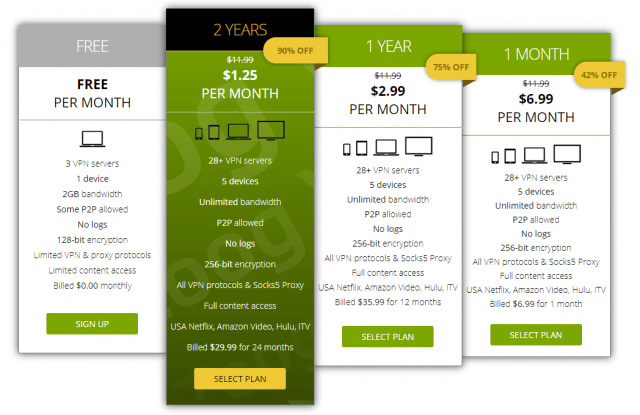 This is a 42% discount in comparison to the original price of $11.99 per month. This one is perfect for a VPN user looking to pay month-to-month.

The pricing is decent with this plan, especially since you don’t have to make any commitments to get this low of a price.

Many other month-to-month plans I’ve seen can cost twice as much as this one in our Zoog VPN Review.

This is a 75% discount in comparison to the usual price of 11.99 per month. Overall, you’ll pay $35.88 for access to ZoogVPN for one year. This is a huge saving compared to the first plan.

This plan will set you back $29.99. That means you get an extra twelve months and you even save money compared to the 1-year plan.

If you aren’t sure how you feel about ZoogVPN, start out with the one month plan. Then, if you like it, I would recommend boosting your package up to have a full year of access.

You’ll save more of your hard-earned cash that way.

Here’s how the company’s pricing plans look on their site currently:

That means you can try out the free plan before paying for the service and still get a full week to decide if it’s right for you.

They also have tons of different payment methods, like PayPal, Visa, and MasterCard.

Unfortunately, I wasn’t able to find any option to pay with Bitcoin on their site.

A few other services will offer that as a private alternative. That way, your VPN company won’t have access to the personal information on your credit card or bank account.

Pricing for this VPN seems pretty fair. But how does ZoogVPN perform in comparison to competitors?

One U.S. server in Chicago worked with Netflix

Testing out Netflix is my favorite part of this Review process.

Netflix has been cracking down on VPN services in the last few years. So even if a company claims to work with Netflix, their service might not.

We repeated that process across the following servers and none of them worked.

We started to get discouraged.

But then, a U.S. Chicago server saved the day, allowing us to finally start streaming.

I already alluded to this one above. But it’s worth repeating.

Most major VPN services will give you a kill switch just in case. It’s kind of an essential feature in my opinion.

For example, public WiFi connections are notoriously unreliable. You never know if they’re going to work correctly (or who else is on there listening).

However, if they were to drop while browsing on your phone, chances are your cell network would pick it back up.

Except, when that happens, your VPN connection goes down. So you’re left completely exposed.

Simply put: If you’re planning on using a VPN for public WiFi’s while traveling, etc., a kill switch is a must.

After logging in on ZoogVPN.com, you can access the support area on the left-hand side of the screen.

You’ll be required to provide your name and email, and you can also select the device you’re using, the VPN type, the type of support you need, and the priority of your question.

It’s nice that ZoogVPN gives you a time window to expect to hear back from them.

However, some other VPN services such as NordVPN, offer more advanced customer service options like live chat.

This is a huge con for their customers because someone is there at all hours of the day to answer any questions you might have and provide support in real-time. No matter what time zone you might be located in.

Unfortunately. ZoogVPN isn’t one of them. However, there’s nothing wrong with ticketing systems, either. It works, but it will take a bit longer to receive a response.

As with most kinds of customer support, it’s wise to check out ZoogVPN’s FAQ page to see if your question has already been answered. Hope You like the article on Zoog VPN Review.

TunnelBear VPN Review(Tested). Is It Safe To Use In 2021?

Private Internet Access VPN Review (2021 Updated). Is This The Best VPN In The Market Right Now?